+21% VAT for individual customers in EU without EU VAT registration number + shipping
Erica Synths Black VCO is an analogue VCO with four simultaneous waveform outputs and one octave down suboscillator.

The core of the VCO is borrowed from a famous Russian synth Polivoks VCO and in the exponential converter we use the original matched transistor IC that was used in Polivoks. Unlike harsh logic divider based suboscillators, Black VCO transistor-based suboscillator generates a distinct, rounded squarewave. Together with the Black VCO Expander a waveform mixer you get a massive analogue sound source with plenty of patch points for modular use.

Erica Black series are high-end modules with unique functionality. Only the highest quality components are used and all inputs and outputs are protected against undesired overvoltage. When designing the Black Series, we did not economise on the module width, we put design and usability first. Big knobs are assigned to functions that make difference in sound.  Together the Erica Black series are a range of modules that make an entire synthesizer.

Black VCO and Black VCO Expander is a phenomenal Polivoks sounding Oscillator with a harsh, solid, and smooth sound. The Black VCO is your workhorse. I recommend buying the combo as your sound source with an edge and brutality. The module is an outstanding implementation of the transcendent Russian synth Polivoks VCO. The blend of both modules from Erica is a real asset in my Eurorack. - StrongMocha 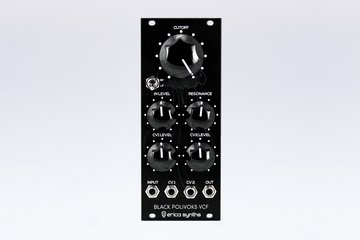 Erica Synths Black Polivoks VCF is one of the most authentic sounding emulations of the famous Russian synth the Formanta Radio Factory Polivoks.

Highly electric with a fresh dose of industrial techno – a bold debut from the Latvian artist SKD.