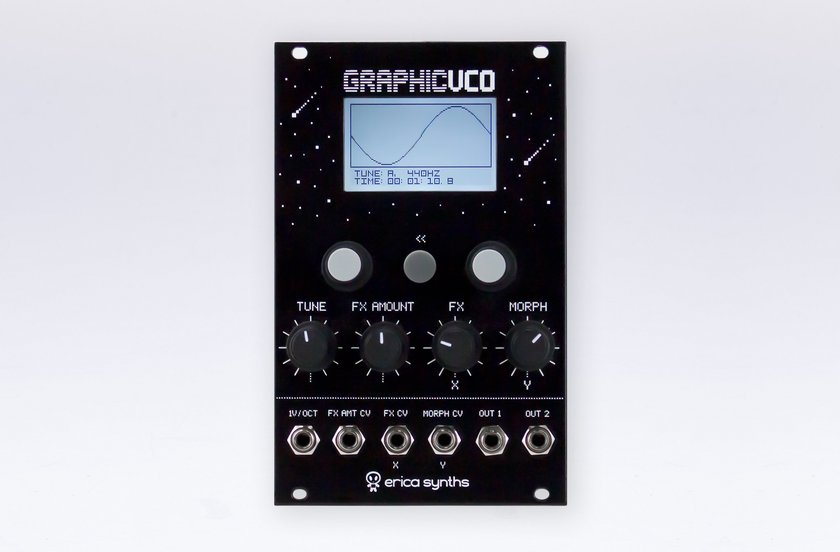 Waves, wavetables, FXes and other settings can be saved and recalled from the memory instantly. The module has two outputs – the main output and the output with configurable suboscillator.

NB! To have the module functionality up to date, we recommend you to check the Erica Synths home pageor our social media from time to timefor announcements about firmware updates for the Graphic VCO. You can update the firmware of the module via miniUSB cable. More detailed instructions of the firmware update can be found in the User Manual.

The sound is clean, modern, punchy and detailed thanks to the unit running at 96kHz — quite different to some low bit-rate wavetable oscillators on the market. Wavetable interpolation is smooth as butter and with the built-in effects you can dirty things up in many different ways. The module scores highly on the sound front. The Graphic VCO is a very capable oscillator module with excellent sound quality and a lot of features that could make it the right choice, especially if live performance is your thing. - Sound On Sound

The bottom line is that the Graphic VCO is a joy to use. It’s a module that’s unashamedly digital, yet unmistakably eurorack. I think Erica showed a great deal of careful judgement and restraint in the design of this module. It would have been easy to have made it bloated and cumbersome trying to cram as many features as possible into it, but they kept it fairly simple which keeps the module fun and immediate in use. It’s capable of a huge tonal palette ranging from beautiful to brutal that is bound to fit in with a lot of different styles and systems. - Ask Audio

The ability to draw and then effortlessly jump between different custom digital waveforms in this way feels unique on the Eurorack stage, and allows for a wide range of tones and transitions between them. - Orb Mag

One of the greatest music producer of our times - Randall Dunn recently wrote a little piece about sounds he love. He says: “We were both pretty hungry in Michigan in the 80's looking for new sounds and music. [..] Mostly played on Synclavier and a Roland JD 800 I began a strange love affair with late era digital synths like those and the PPG wave and why sometimes I still prefer the brutality of a wavetable to a Minimoog.”

Of course, everybody loves sound of an analogue synth. It is a non-questionable core value of huge and influential tradition started in the second part of 20th century. However, if you are bored just for a minute to take part in that old collective ritual of millions, if you feel that rebel growing inside of you, if you are hungry to discover your own path, your own signature sound, if you really would love to jump into tomorrow now…, then Graphic VCO is your necessary ally. Draw your own waveforms. Sculpt your own voice. Master your own musical gesture. And you may find yourself in a new beautiful world. Indeed.

As Leonardo once said: “If I had a Graphic VCO I would have never wasted so much time with those noiseless paintings…” 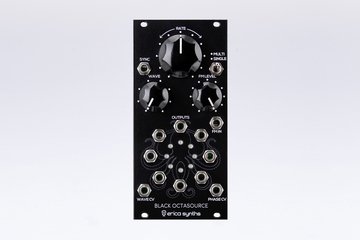 Erica Synths Black OCTASOURCE is what we want to believe - an LFO carried to its extremes. 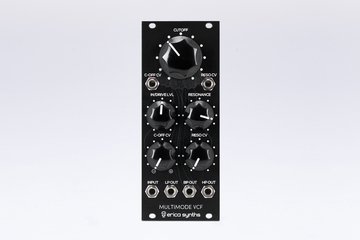 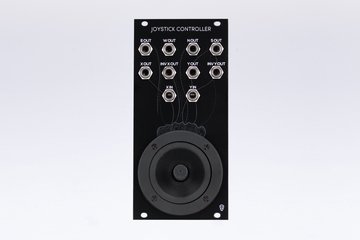 Erica Synths Black Joystick Controller is a manual command center for your modular setup, it also generates several sets of CVs and alters incoming CV signal. The joystick doesn't have a spring.