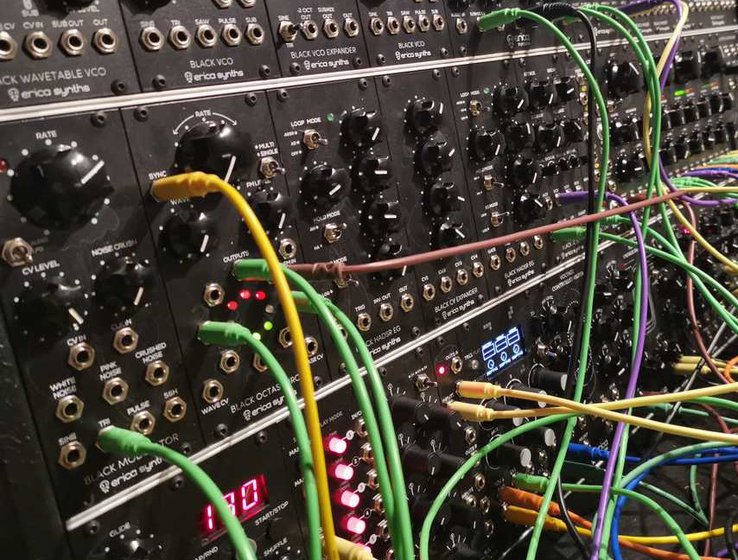 For over 20 years, Inkonst has been an important hub for Malmö's culture enthusiasts.

Each week, the cultural institution provides its visitors with live performances, innovative performing arts and boiling club nights. On February 11, it is time to start another investment in the old Mazetti house on Bergsgatan. Then Inkonst's new music studio is inaugurated. The studio, located next to the famous “blackbox” in the basement, is supposed to be a place where preferably electronic music creators can come to work on their projects.

Inkonst's new venture is intended to serve as a resource for the city's electronic music scene. - It will be an opportunity for us to open up and be a strengthening force in Malmö's cultural life, says artistic leader Ulf Eriksson. - Aftonbladet

When designing the system, Erica Synths draw inspiration from the works of pioneers of the electronic music - Pierre Schaeffer, Karlheinz Stockhausen, John Cage, Louis Barron and others.

Meaning, the system does not have a typical synthesizer (VCO-VCF-VCA with controllers) architecture, rather, it’s a collection of sound and control voltage generation and processing modules to encourage users to experiment, research and explore new territories of sound. The Graphic VCO alone can be used to illustrate virtually all methods of sound synthesis– subtractive synthesis, additive synthesis, FM synthesis, phase distortion synthesis and others. The Sample Drum, apart from being powerful sample player with plenty of manipulation on different parameters, can emulate experiments on the reel to reel recorders, where tape was cut is smaller pieces, rearranged and played back at various speeds. And, of course, with external controls – a keyboard or a sequencer, the system becomes powerful sound source that can be integrated in any electronic music setup.

At the opening event Jean-Louis Huhta also known as Dungeon Acid will perform on the 3x126 HP Erica Synths only system to explore it's capabilities.

Zen Delay has quickly become one of Ricky Tinez most used FX units - ''Whether i'm making house, hip-hop, techno, whatever type of music the Zen Delay is practically always on it.''

Erica Synths teams up with Elevator Sound to offer modules with 15 % off...

Telekom Electronic Beats reviews done by Stimming have been among our favorites for a reason...