Do not underestimate because of the size! 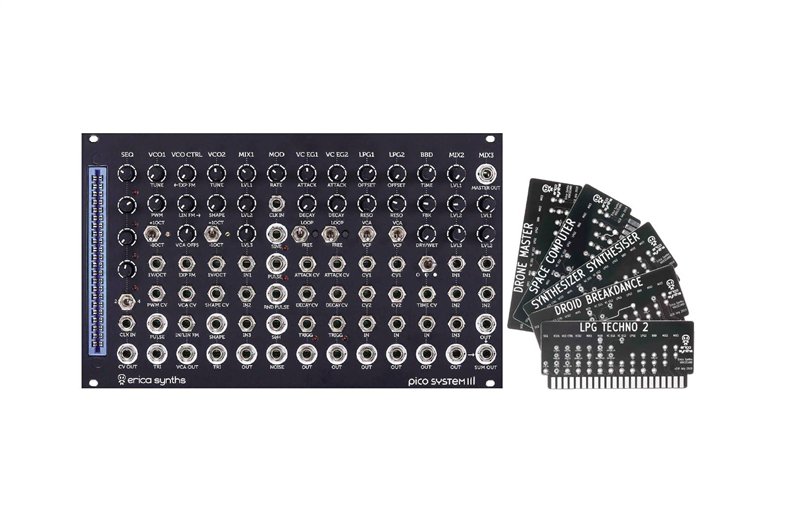 Despite its name Pico System III is a full-fledged instrument, that should not be underestimated.

It's available as a full, analog modular system, equipped with everything you need to dominate the universe of sound. It offers 13 slim modules enclosed in one housing (there is also a desktop version with a dedicated power supply).

There is a clever oscillator section (first one with PWM, and second one with Waveshaping) allowing for linear and exponential FM modulation. In addition, there are three mixers that accept audio and CV signals (the last two are normalized among themselves). There is also a modulation section offering simple LFO, Sample and Hold, Random and white noise as well as synchronization with an external clock. This section can be used, among others to drive a simple 4-step sequencer on the left. We also have two twin AD envelope sections with the option of looping and controlling attack and release parameters using CV signals. Right next to it are several LPG sets inspired by the achievements of Don Buchla (available due to great-sounding Vactroles), which may be used as low-pass filters, self-oscillating at more aggressive resonance settings. As if that wasn't enough, a phenomenal-sounding BBD delay with a built-in filter was added for dessert! And last but not least - on the edge of the left side, you'll find a preset card slot. They allow you to "remember" a previously created patch, as each card contains points normalized with individual sections of the synthesizer. So you do not need to patch the module to drastically change its configuration, which can be invaluable when playing live. The user can use a set of five saved cards with factory patches, that might become an inspiring beginning of fun, but there are also  cards on which you can save your own settings using solders and tin.

I can’t recall when was the last time I had so much fun and was so inspired with an instrument. It's small, it's cute, sounds phenomenal and has a lots of character.

- Review in Polish in Estrada I Studio

The third edition of the festival that was to take place in Riga on 29th of May 2020 is cancelled.

Who will play the third edition of live electronic music festival organized by Erica Synths?